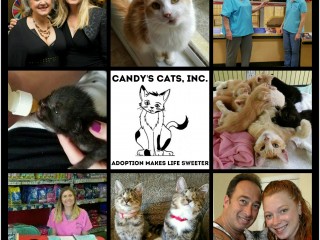 “Our focus is on saving those who are not saved without our help.”

Candy Sullivan has been a champion for cats in need since 2002, and in 2005, she founded Candy’s Cats, Inc. on a shoestring and a hope.

No stranger to the struggle of cats on the street, Candy has been a driving force in central Florida for cat rescues and adoptions.   Her drive to help Florida’s cats began when she realized that over a year and a half, 31 kittens had been born to the feral colony near her.  After getting the mother cats fixed and the kittens adopted out, she was ready to rescue more.

She began by working with another group, It’s All About the Cats, Inc.  When she began her own organization, a former volunteer contacted her.

“How do you keep your records?” she asked Candy.  And that was Candy’s introduction to RescueGroups.org.

“It was right before Christmas,” she said.  “A volunteer set up my RescueGroups.org account and then I was alone with it for the holiday.” She laughed.  “And if somebody like me, not computer literate, but able to delete everything on my computer without trying, if I can do it and teach everybody else to do it, then anybody can use it,” she said.

Initially, Candy’s Cats didn’t use all the services they had signed up for.  “We just didn’t have the volunteers,” she explained.

“2007 was our heyday.  We did about 700 adoptions, we had 45 fosters, and 400 cats.” She laughed as she told of Saturdays where volunteers would call her “at 2 o’clock in the afternoon and tell me they were out of cats.”  Currently, the group has about 25 to 30 volunteers at any given time.

“The online adoption applications are amazing.  We do all our communication with potential adopters through the form.”

Best of all, she said, they have a dedicated volunteer who maintains the adoption forms, the contracts, and other online documentation.  “It’s great,” she added.  “The online adoption applications are amazing.  We do all our communication with potential adopters through the form,” she said.  “All of our comments about the adoption are in one place for all of us to see at any time.”

When the volunteer who manages forms for Candy’s Cats was hospitalized for 10 days, the organization found out just how valuable online availability can be.  “We had everything at our fingertips,” Candy said.  Since she travels frequently, the ability to view applications and their comments while traveling has become invaluable.

Candy’s Cats has a number of loyal donors that have allowed the group to grow and maintain a premier reputation.

Candy said it’s been a lot of hard work.   “We have a protocol, and we stick to it, no matter what,” she said.  Each cat must meet vaccination requirements and be neutered before they can attend an adoption event.  “No exceptions,” she added.  They’ve seen their share of illness, she said, citing one set of kitties who came in with upper respiratory infections, coccidia, and ringworm.

Using the file upload function of their RescueGroups.org account, volunteers can keep veterinary medical records, special needs instructions, and any other information attached to each cat’s web page.  All volunteers can access the documents they need anywhere.

The organization also does an annual fundraiser so that veterinary expenses are paid for when foster families follow the protocol.  The group works with seven vets and has numerous adoption sites.  “One of the keys to our success has been some really generous donors,” Candy said.  “We’ve been able to afford to establish a specific protocol for vet work and follow it every time.”

The cats in the program are mostly found cats, but some are from shelters, and are the special needs cats, abuse cases, hoarding situations.  One cat is recovering from a broken jaw.  “Once they are in my clutches, they’re not going back to the shelter,” Candy said emphatically.  “We take care of them.”

The Online Forms Service has been invaluable to Candy’s Cats, but Candy also loves the Website Service.  “We’ve completely changed our website about six or seven times.  I love it!,” she said.  “It’s easy to use.”

For Candy’s Cats, an attractive website, the ability to send potential adopters to an online form, and some fantastic volunteers and donors, are the keys to the success.  And the energy and exuberance of the founder, Candy Sullivan, whose door is always open to a cat in need.